News How About The Flat Golf Swing of Mattt Kuchar?

How About The Flat Golf Swing of Mattt Kuchar?

I hear about Matt Kuchar all the time when giving lessons.  Matt as been around longer than you might know, (graduated from Georgia Tech in 200 but also played some tour events as an amateur) and after doing a slow motion analysis of his swing for you I believe his swing is far better than you might think!

How much money has he won with this crazy swing of his…..Mucho!  I tried to add it up from PGA Tour.Com and got disgusted and stopped.  Mucho Dinero!

For driving distance he’s 128.  There goes your excuse that you have to hit it far to win. Driving accuracy he’s 43rd.  So it isn’t that he hits it short and straight.  Greens in regulation he’s 85th!  But…..in scoring average he’s 5th!!!!!!!  Sand saves he’s 9th.  But that still doesn’t solve the puzzle. 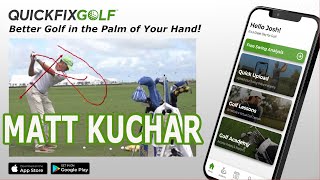 The Seven (7) Laws and Factors of Ball Striking

You Were Destined to be a Slicer Don't Blame Yourself!

Karate Instruction Has it Right!!!

Are You Playing Whacamole With Your Golf Game?

These are not the Droids you are looking for.....

Ballet Dancers Have the Right Idea

Release the Golf Club as Soon as You Can!!!

To Be the Best, Surround Yourself With The Best.

If You Could Only Use a Teleprompter When You Play Golf

A Basic Approach to Pitching

What’s the Right Down Swing Sequence?